AF has always been very clear, set in the real world, with a supernatural element in the form of fairies. BUT. This might be a bit too much.
i write because you exist.
Top

Out of all the adventures of being crazy on the scale of 1-10, this probably hits 11, for being insane. All of the sudden, Artemis has to save the world and there's a gate under his house for a long time?

I doubt I will read this. As I said, I believe one character will die.

Yeah. I'll look forwards to it, but I feel that the first six books were the best. The seventh and the eighth don't sound too good...

One of the reasons I like AF is cuz it incorporates fairies without it sounding fake, or cheesy. But TLG sounds quite a bit cliche and unrealistic. I'm sorry, but that's just my opinion. :3
Top

I trust Eoin Colfer to do this plot in a way that seems believable.
He made fairies believable . I bet he can make portholes believable too.

Agreed. At first when I heard the title, I was thinking, "Wow, sounds like Percy Jackson or something." In other words, I didn't thin it sounds like AF
Top

Agreed. At first when I heard the title, I was thinking, "Wow, sounds like Percy Jackson or something." In other words, I didn't thin it sounds like AF

*Nods* I agree to, it sounds like Eoin is stealing a mini idea from Percy J. Maybe he didn't even have an idea for the book until he read PJ.

okay, one thing i wanna say about this book: I really really hope it didn't end haw animorphs did. I don't want people dying and the rest of the living people going on a suicide mission. That would really suck.
Top

yunyun wrote:okay, one thing i wanna say about this book: I really really hope it didn't end haw animorphs did. I don't want people dying and the rest of the living people going on a suicide mission. That would really suck.

Okay, I totally agree with you there.

However, I also really trust Eoin Colfer. Come on, guys, have a little faith! While AF and the AC was different/weirder than the other books, I don't think it was that bad! I'm excited to see what Eoin Colfer has in store for the last AF book. BTW, I am SO sad it's the last one! I don't want it to be over!!!
The world is a strange place....


But the plot seems... a little weird. >_< Maybe he'll have something secret in there that he's not telling us for we won't get mad or something.

I will simply hope That Eoin Colfer will make this believable and nowhere near as fantasy-like as it's described.
Top

I don't feel so good about that title. The first thing I thought when I heard that was, "How original." The Last Guardian? Please. Although I'm sure the story itself won't be as cheesy as the name, I still find it pointing to.. eh, a different plot base than the normal AF books.

I watched the video, and my face just fell. Eion... Too cliched, too fantasy, too convenient. If there's not a lot of deatil on HOW this happened, the book will be thrown across the room. However, I'm excited about learning about old magic. And why would peaceful faries- even soldiers- rampage?
Not all those who wander are lost...

Yeah...that's what I thought too. I liked AF because Eoin made the fantasy seem realistic, TLG doesn't sound very interesting or original to me. But I hope that TLG will have some sort of entertaining twist. Hopefully. :3
Top

The book usually turns out a little different then the description. I mean in TAC, I thought it meant that Arty himself was going on about *love* to dear Holly. But it was Orion.

But I hope this is good, because last books of series are usually disappointing. But I won't lose faith in Mr.Colfer. 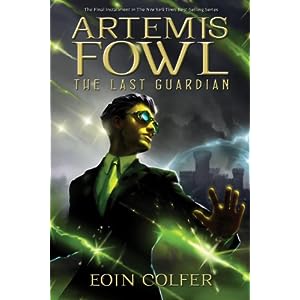 The cover of TLG. It looks very dramatic, no?

Also. "Seemingly nothing in this world daunts the young criminal mastermind Artemis Fowl. In the fairy world, however, there is a small thing that has gotten under his skin on more than one occasion: Opal Koboi. In The Last Guardian, the evil pixie is wreaking havoc yet again. This time his arch rival has reanimated dead fairy warriors who were buried in the grounds of Fowl Manor. Their spirits have possessed Artemis’s little brothers, making his siblings even more annoying than usual. The warriors don’t seem to realize that the battle they were fighting when they died is long over. Artemis has until sunrise to get the spirits to vacate his brothers and go back into the earth where they belong. Can he count on a certain LEPrecon fairy to join him in what could well be his last stand?"
Top
Post Reply
128 posts